I am excited to contribute my quantitative and research skills as a Science Librarian at OU Libraries.  My background is in quantitative biology.  I use a wide range of software tools to explore interesting research questions from my own areas of expertise, in collaboration with other researchers, and now helping patrons in my position as a science librarian. I am experienced in and enjoy helping other researchers use R and SAS, choose appropriate statistical techniques, and manage their data.  This is evidenced by my certification as an instructor for Software and Data Carpentries, co-instructing Quantitative Methods in Natural Resource Management (a graduate-level course on experimental design and statistics) during my time at the Natural Resources Institute, and helping many patrons and collaborators with R, SAS, ArcGIS, QGIS, and statistics.  This is now part of my position as a science librarian to help guide patrons to appropriate software and statistical resources.

In my own research, I have used a wide variety of techniques, from univariate (including basic statistics to mixed models to power analyses) to multivariate (including canonical correlation analysis to PCA to Mantel tests) statistics.  I have also spoken on more than one occasion about data and project management from my experiences managing my own and others' data during my Ph.D. and post-doctoral work and instruct with The Carpentries to promote best practices in data and coding skills for scientists of all disciplines.

My Ph.D. research (where I worked with Michael Patten at the University of Oklahoma) focused on the behavioral and genetic dynamics of an avian hybrid zone, using the Tufted and Black-crested Titmouse species complex of Oklahoma and Texas as a model system. In my first postdoc, I worked as a Post-doctoral Fellow and then Research Associate with Nicola Koper at the University of Manitoba's Natural Resources Institute where I looked at the effects of oil infrastructure noise on prairie songbird behavior, particularly comparing Baird's Sparrow and Savannah Sparrow.  I then returned to Oklahoma where I was a Post-doctoral Research Associate jointly with Michael Patten and Eli Bridge at the Oklahoma Biological Survey at the University of Oklahoma.

My biological research interests include evolutionary and behavioral ecology, ornithology, and natural history.  My research particularly focuses on the effects of both natural and altered environments on behavior and distribution.  My projects examine aspects of this ranging from specific responses to anthropogenic noise pollution to a broad examination of factors influencing a hybrid zone's stability to a theoretical framework tying together natural and sexual selection in hybrid zones.  I additionally have a long-standing interest in natural history of birds, odonates, lichens, and Lepidotera (butterflies, skippers, and moths).

With my supervisor Sarah Robbins and colleagues Amanda Schilling and Brent Tweedy, we have an article titled "Recruiting, Hiring, & On-Boarding Non-MLS Liaison Librarians: A Case Study" accepted at Library Leadership & Management as of 2021.

I'm working with Eli Bridge and J.E. Ruyle (OU Advanced Radar Research Center) to create ETAG, which will be a data management system for scientists working with radio-frequency identification (RFID) technology for animal studies.  The final version will include the ability to automatically upload data from wireless-enabled RFID readers, a secure archive of researchers' data, and a customizable output API that will allow users to showcase their research and data on their own website or education websites.  This system will facilitate data management, currently done by each individual researcher, leaving researchers with more time to do science.  This project is funded by NSF ABI 1458402.  An overview of the hardware side of ETAG with a brief discussion of the software has just been published in Frontiers in Ecology and Evolution.  This manuscript is in revision.

TAGS, the Totally Awesome Geolocator Service, is a web-based service that allows you to edit messy geolocator data in a point-and-click format while saving excluded values for reproducible work.  The app code is now available on github now if you wish to use it locally (required for datasets >30 MB) or visit our R Shiny app online.  It was featured at a 2018 International Ornithological Congress workshop on geolocation.  This manuscript is in preparation.

I was honored to work with noted scorpion expert Doug Gaffin at OU to review classic and emerging models in arachnid navigation.  This was published in 2020 at Journal of Arachnology!

Landscape ecology of the Lesser Prairie-Chicken

I worked with Michael Patten to determine avoidance thresholds of Lesser Prairie-Chicken to anthropogenic disturbance.  This landscape ecology study will help inform management decisions for this vulnerable species by providing quantitative guidelines on siting wind farms and other structures in this prairie grouse's range.  Alexandra Barnard led this project after I moved to OU Libraries; the work was published in 2021 open access at Scientific Reports.

I worked with Eli Bridge and collaborators Jeremy Ross and Andrea Contina (both at OU) to determine how land use and bioclimatic variables affect grassland bird distribution in Oklahoma, and how climate change may impact these already vulnerable species.  We're using spatially explicit models with machine learning to generate more accurate maps across regions with different drivers of populations.  Additionally, we are testing whether this computationally expensive method generates substantially improved distribution maps relative to the processing power it takes to create the ensemble maps.   This work was published in Ecology and Evolution in 2018 and the code is available at datadryad.org. 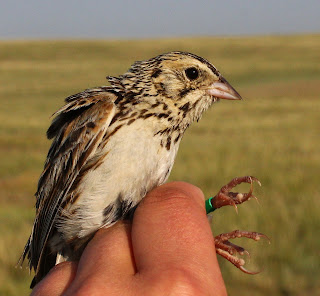 I worked with Nicola Koper on the effects of noise from energy development (specifically oil and gas infrastructure) in southeastern Alberta.  This project specifically compares how Baird's Sparrow (Ammodramus bairdii) and Savannah Sparrow (Passerculus sandwichensis) songs are altered in the presence of noise.  We found that both species change their songs in spite of the Savannah Sparrow's higher levels of rangewide variability in song (2017 in Bioacoustics) and additionally that some infrastructure types alter more song elements of Savannah Sparrows than other infrastructure types (Condor, accepted Sept. 2017).  I'm a co-author on an Ecology and Evolution paper asking whether noise pollution affects the ability of observers to detect species by sound during surveys. Finally, we conducted experiments to see how Savannah Sparrow response to song is changed with both songs from quiet and noisy environments in the two environments, respectively, and whether individual physiology was associated with these responses.  Our 2018 open access article in Scientific Reports has all the details, code, and data. 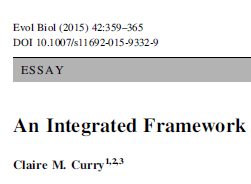 I proposed a synthetic framework that combines the major hybrid zone models based on direction of selection.  This was published in 2015 as an essay in Evolutionary Biology. 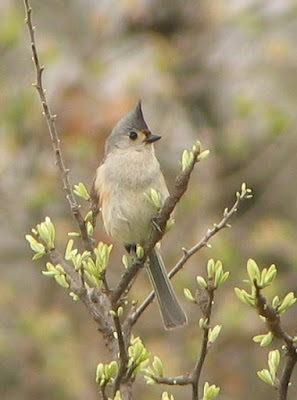 My Ph.D. work, with Michael Patten, examined several aspects of a temporally complex passerine hybrid zone in the southern Great Plains of North America, that between the Tufted Titmouse (Baeolophus bicolor) and Black-crested Titmouse (B. atricristatus).  Data and links to the papers are also on Open Science Framework.

We showed that the titmouse hybrid zone has been stable in Texas since its last survey in the 1950s, map the range expansion into Oklahoma, and describe plumage and morphometric changes across both the younger Oklahoma and older Texas contact zones. We additionally provide the first published color illustration of the Dixon hybrid index (1955).  This work was published in the American Midland Naturalist in 2014.

I used male playback experiments and female preference experiments to examine how the role of premating isolation may differ between the younger and older contact zones. These experiments along with data from NestWatch on nesting success have been published in Behavioral Ecology and Sociobiology.

Using next-generation genomic data (in collaboration with Jason Weir) and mitochondrial cytochrome b we compare genomic and geographic clines in both the younger and older zones to better understand what genes are involved in reproductive isolation.  This manuscript is in revision.

I recorded songs and collected vegetation measurements from across both the younger and older parts of the titmouse hybrid zone to document song differences and test the acoustic adaptation hypothesis as an explanation for those differences.  This work was published in 2019 in Behaviour.

Cassin's Sparrow habitat use in Oklahoma

In collaboration with Jeremy Ross and Eli Bridge, I'm examining a dataset of Cassin's Sparrow habitat use from western Oklahoma to contribute to the natural history of this little-studied species.  This manuscript is in revision.

I'm collaborating on an illustrated checklist of lichens found in Wise County, Texas, and surrounding areas with photographer and naturalist Mary Curry. Our focus is on surveying the lichen flora of the LBJ National Grasslands (which is located in Wise County) with additional sampling at nearby sites.  We are currently sampling sites and identifying specimens.  We have an Open Science Framework project where you can see photos (including of spores and chemical tests) and our preliminary specimen spreadsheet.