Measurement error is "the variability of repeated measurements [...] relative to its variability among individuals in a particular group" (Bailey and Byrnes 1990, pg 124).  In other words, how  much wobble is there in repeated samples on the same individual?  I used measurement error in Curry and Patten (2014) after learning about the idea in a graduate multivariate statistics class I took a few years ago.  Papers such as Lougheed et al. (1991) and Marantz and Patten (2010) showed implementations.  I am now wanting to implement the same idea for repeated songs by the same individual bird in a species that sings one song type per individual.  How much does a bird vary in repeats of its standardized song?

I first started looking for how to implement a model II nested random effects ANOVA (as described in Bailey and Byrnes 1990), like SAS's PROC NESTED but in R, and ran into the usual problems trying to get the two programs to give equivalent output (where were my mean squares in R?  So aggravating sometimes...).  I was also looking to see exactly how a similar concept that I just learned about, repeatability (Lessells and Boag 1987; also known as the intraclass correlation coefficient), was related.  At first I thought they were the same thing, but after carefully writing out the equations from both Bailey and Byrnes (1990) and Lessells and Boag (1987), I realized they can be calculated easily from one another (and I was backed up by further reading in Wolak et al. 2012, pg. 130, who state "measurement error is simply one minus the repeatability", as I had suspected).   Measurement error uses within-groups mean square error (or variance within groups) as the numerator in the calculation, while the intraclass correlation coefficient (or repeatability) uses the among-group variance (which both Lessells and Boag 1987 and Bailey and Byrnes 1990 show to calculate using the same method).

As an aside, repeatability appears to be used rather broadly, and intraclass correlation coefficient also appears to have some other defintions, if wikipedia's summary is to be believed, but in the papers I am citing they all are comparing within and among group variation (the ANOVA framework).

Armed with this new terminology and knowledge, I decided to use the R package 'ICC' (Wolak et al. 2012) which calculates repeatability.  I tested this on some sample data from the SAS website with both the model II nested ANOVA as used in Bailey and Byrnes (1990) and in R.

Use the "turnip" dataset as the SAS website shows, then run this modified code: 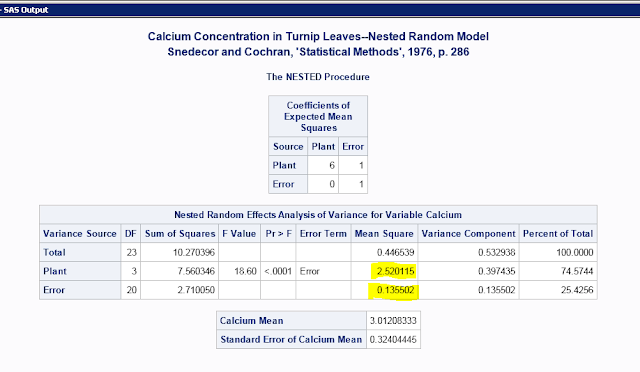 Adding the two numbers together gets 1, which means all the variation is accounted for (and thus you only need to calculate one; to get the other just subtract from 1).

Using the ICC package's function ICCest() gives essentially the same answer (the difference appears to be the level of precision in the decimal places), but also provides confidence intervals and other data that are explained more in the Wolak et al. paper.  (Import the data first, obviously, before running this code.  You can enter it by hand or export from SAS as a .csv).

The highlighted number is repeatability, which is essentially the same as the calculation by hand from SAS barring what I believe are differences in decimal precision used in the numbers for calculating the answer.

Finally, since SAS uses a random effects model, I hoped that one might be able to calculate measurement error by hand from R just to be sure it all works.  I found a page comparing different methods of repeatability in R that showed an example using the package 'lme4'.  Calcium is the measured variable, plant is the random effect, and there are no fixed effects.

So, all three methods (by hand with lme4 in R, using the ICC package in R, and by hand from SAS PROC NESTED) give comparable results for the balanced design (for the plant dataset, n=6 for every individual plant, i.e. there are six measurements for any given plant).  For an unbalanced design, with varying numbers of measurements per group, Lessells and Boag (1987) provide an equation to calculate the appropriate sample size coefficient n0 (see their equation 5).  The ICC package uses that equation to calculate n0 (Wolak et al. 2012; this is listed as $k in the output from ICCest)  I tested this in the R packages only as I was hoping the variance from lme4 might have already been adjusted for the sample size coefficient issue.  ICC already states that they adjust (Wolak et al. 2012 and in the help file).  With the first row deleted from the turnip data set, ICC gives a repeatability value of 0.7432083 and k (which is n0 from Lessells and Boag)= 5.73913 (slightly under the previous 6, which makes sense as I deleted one row).  With that same one-row-deleted data using lme4, I took the random effects variances (0.3952/(0.1419+0.3952)) and got 0.7358034, so its variance calculation is not including the repeatability adjustment for n0.  This is not really surprising since that's not what it's designed to do.

So, what I will be doing to check for "measurement error" on my birds (how much "wobble" each bird has in its otherwise standard songs) is substitute the song variable (let's say frequency) for "calcium" and the bird ID (individual ID or band number) for "plant".  The random effect in lmer, the classes in SAS PROC NESTED, and x in ICCest are all the individual/subject/item from which you get repeated measurements for measurement error or repeatability.

Take home message: ICC is the easiest to use as it will take into account an unbalanced design for you already.  With SAS you can calculate for an unbalanced design but you'll have to do it by hand.  Thus, ICC and SAS should cover all cases.  With lme4 you can calculate repeatability and measurement error for balanced designs by hand, but I don't see a particularly obvious way to get the mean squares as in SAS (and I need to move on to other parts for the analysis), so I'm going to leave it at that for now.

and here are some helpful examples of papers that use measurement error:
Lougheed SC, Arnold TW, Bailey RC. 1991. Measurement error of external and skeletal variables in birds and its effect on principal components. Auk 108:432–436.
Marantz CA, Patten MA. 2010. Quantifying subspecies analysis: a case study of morphometric variation and subspecies in the woodcreeper genus Dendrocolaptes. Ornithological Monographs 67:123–140.